Saying Goodbye to the Conservative Party of Canada

The Conservative Party of Canada in 2017 is appealing to the worst parts of our nature, with no actual conservatism.

Last year, in good faith, I took out a membership in the Conservative Party of Canada. I had several reasons. I wanted an opposition that was worthy of the term.

I thought leadership candidate Michael Chong had a lot of good ideas. I had read a good piece by Andray Domise urging white progressives to join the CPC and try to change it from within, and Ryan McGreal also articulated a case for joining in an RTH article.

There were a bunch of us. I signed up a lot of people. In my riding, Hamilton Centre, Chong ended up leading on the first ten ballots before he was eliminated.

Anyway, the leadership election is over and we don't have Chong as leader. We have Andrew Scheer, i.e. Stephen Harper with a goofy smile but the same vicious politics of division. Kellie Leitch is still in caucus. Scheer tries to raise money by fearmongering about a former child soldier.

Oh, and before I forget: in the leadership race, Scheer also fearmongered about a man who had been found not criminally responsible for a murder. This man had been completely out of touch with reality (with new presentation of psychosis) when he committed a ghastly crime.

After starting on medication, he had been quite stable. He was released by a tribunal under the rules that were tightened by Stephen Harper.

Anyway, that's your Conservative Party of Canada in 2017. Appealing to the worst parts of our nature. No actual conservatism. I've been meaning to do this for a while, but here you go. I resign my membership. 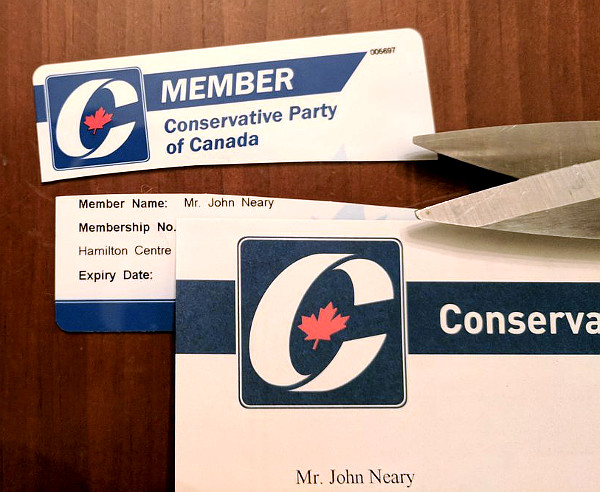 I'm a contrarian by nature and not a joiner. But I'm signing up with Jagmeet Singh to be the new leader of the New Democratic Party. Singh is a good man. He was speaking out about carding before it was cool to do so.

This is not the first time I've supported the NDP. I donated in 2015 - I thought outgoing leader Tom Mulcair's stand on the niqab was brave.

I supported Chong in good faith because I believed, and still believe, that it matters who leads the Conservative Party.

I doubt there is anyone in the NDP whose opinions of the leadership candidates are quite as bipolar as ours were for the Tories. I find some of Nikki Ashton's policies unwise, but I know her values can be trusted. In contract, even "moderate" candidates in the CPC were goonish.

Yes, we supported Chong, too (and unsubscribed to the CPC email spam - good grief). Didn't think about cutting and returning the cards. Will do, though.