Theatre Review: Chekhov's 'The Bear' at The Pearl Company

From the syncopated pulse-like prologue to the beautiful little Eden-inspired epilogue/apotheosis, this is not a production that anyone can afford to miss.

This Spring's film adaptation of Chekhov's "The Seagull" featuring Annette Bening and Saoirse Ronan is being dismissed by critics as: "Bloodless", "a chore to sit through" and "stuffy". Happily, none of these adjectives apply to The Pearl Company's current production of Chekhov's "The Bear". 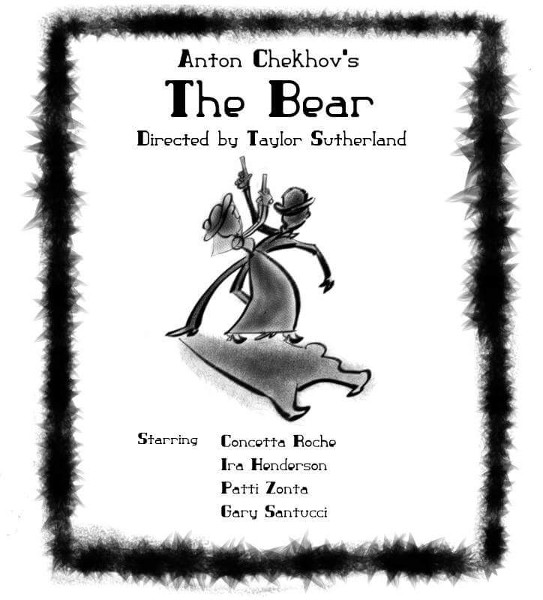 As the lights fade up on two actors down on all fours beating their hands percussively into the floor, accompanying guitar strains played by Gary Santucci, you may think you've arrived at the wrong theatre. "This is Chekhov?", you may ask yourself. Yes! It is manifestly Chekhov, and bloodless and stuffy are the last words that will come to mind as the play unfolds.

And while the subject matter of "The Bear" may seem somewhat foreboding (a widow immersed in grief since the death of her husband), fear not. This production has been designed, choreographed even, to prevent the work from falling into the langour which plagues some productions of Chekhov's work.

After the aforementioned musical prologue, the play proper opens with Elena Ivanovna Popova, a widow of several months standing, being chastised by her loyal servant, Luka for overindulging in grief. But Elena demurs, steadfastly vowing to remain forever cloistered and faithful to her late husband, all the while knowing he was unfaithful to her.

In the midst of their mournful dispute, Grigorii Stepanovich Smirnov, a neighbouring landowner arrives to collect on a debt of several thousand rubles owed to him by Popova's late husband. Smirnov bursts onto the stage with furious bluster.

She puts him off stating that her steward won't arrive for two days, at which time she will pay. However, he's been put off too many times of late, and a battle of wills ensues; with the widow revelling in her bereavement and the bearish Smirnov delighting in his misogyny.

Much of the comedy in "The Bear" relies on contrast. At the time he was working on the play, Chekhov wrote to a friend: "With me, the serious alternates with the trivial". This is the heart and soul of the piece. Themes of suffering and misery interchanging with vaudevillian farce power the work.

Add to this the fact that the two central characters are posturing and self-deceiving by nature. They derive from stock characters which classical Greek comedy termed "alazons", comically ludicrous in their lack of self-knowledge.

Popova is no more truly disconsolate than Smirnov is a true misogynist. Much of the mirth comes from watching her cling to, and exaggerate her mourning, just as he plays up his boorishness and bearishness.

The play also explores ideas of women's suffrage and emancipation and naturally they are viewed in both serious and mocking tones.

This production works on many levels. Not content to present this simply as a comedy of manners, director Taylor Sutherland taps into the true heart of the work, encouraging his cast to play the farce elements to the hilt. And where a period drawing room interpretation could still evoke laughter, Sutherland evades that dangerous languorousness by keeping the players in constant motion.

While it's true that Sutherland has chosen to create onstage action for the listening characters while lengthy monologues are in progress, this is never mere "stage business" to keep a modern audience from dozing off. The stage pictures he creates are always viscerally tied to the core themes of the work, and they are striking, unified and thought-provoking.

Even transitions and furniture and prop-moving become story-telling in astute and discerning ways. The set changes are compelling, as drama, music, dance and song unite in a veritable and effective amalgamation of the arts.

Beyond this, an additional layer of complexity is added in that the characters are permitted to flourish both as the emblematic types they represent, but also to blossom into something more well-rounded. Without giving away too much, they're allowed to grow and see into each other's true natures by inhabiting each other's skins.

Sutherland has been fortunate in his cast. Concetta Roche as the widow wears her mourning weeds with an imposing regality. She embodies a quiet and majestic statuesqueness in movement or repose. Whether delicately cradling her husband's funerary urn or duelling in an almost uncontrolled rage, her face and eyes speak volumes.

As the servant, Luka (traditionally played by a male), Patti Zonta can transition startlingly from a quiet, chirpy charm to madcap anxiety and fury, complete with wringing of hands and gnashing of teeth. Her comic timing is impeccable and her many interpretations of her character(s) are spot-on.

Ira Henderson as Smirnov can't help but stand out, even amidst this talented group. With unmatched energy and gusto, he explodes onto the stage and his intensity never falters or dissipates for a moment. His gestures are large and somehow entirely natural while being altogether appropriate to the work.

He has learned the secret of marrying many shades of passion with nuance. He must also maintain a frenzied state for some time over the course of some rather long monologues. That he's able to succeed in this without going over the top or becoming tiresome is a tribute both to his own considerable gifts and to Taylor Sutherland's galvanizing direction.

Kudos are also appropriate for Pearl Company stalwart Gary Santucci and his magical guitar stylings which are never intrusive, but breathe with the drama and add so much to this production. As do his wonderful set and lighting design.

From the syncopated pulse-like prologue to the beautiful little Eden-inspired epilogue/apotheosis, this is not a production that anyone can afford to miss.