Hammer Can Learn From Steeltown USA

Steeltown USA caught my eye recently in the news, along with a great photo-tour. First, NY Times notes that Pittsburgh's slow-and-steady approach is helping the city cope with the economic crisis:

[Pittsburgh] was in the forefront of the movement to conserve existing structures and clean up the contaminated industrial sites called brownfields, becoming a leader in the field of sustainable building. That is now serving Pittsburgh well during the economic downturn.

Now check out the tall 'skinny' buildings in this photo tour on Skyscraper Page - much like our building stock around King and James. 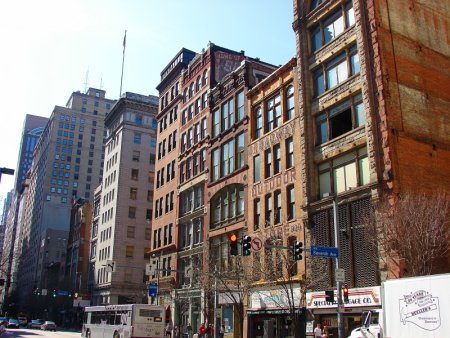 Hamilton can learn much from our Steeltown friend to the south as we face a dwindling steel industry and heavy manufacturing sector.

Will we go the route of Detroit, or the route of Pittsburgh? Our future destination as a city is actually quite a simple journey and it will be decided by decisions we make today.

When viewing the photo tour I couldn't help but think of the difference it would make in Hamilton if we were doing residential conversions of historic buildings at the rate they are in Pittsburgh. The comparison with Detroit is apt: the so-called "renaissance" there is really superficial... shiny offices that are only occupied M-F 9-5 contribute nothing to the health and vibrancy of a downtown. The Lister Block comes to mind immediately... while I'm glad it won't continue its decay, it is so much better suited for residential conversion, and would contribute so much more to the revival of downtown. They seem to have that figured out in Pittsburgh.

I absolutely agree with you. After hearing engineering experts talk about how rock solid the Lister is and in no danger of coming down, I would have much preferred it to sit empty for a few more years until a residential project could be developed for it. I realize some folks won't agree with me, but getting more office cubicles does nothing to enhance the street life downtown. Also, the main floor retail arcade was supposed to become street-front retail, but instead will be turned into office cubicles much like we now see in the old Eatons store facing York. Tinted windows and a lifeless sidewalk will be the view at King William and James in a couple of years.

Do you think letting buildings sit empty helps promote the idea that Hamilton is a vibrant place to live?

not at all. But this building is iconic. We only have one. It's a national landmark. To have it undergo a butchered renovation will mean that many more years will pass before it ever has a chance to be fully utilized in the manner that it was designed to. How many decades will King William and James roll up at 5pm as the office cubicles empty out before the building changes hands and someone spends more considerable money to do a proper renovation that opens the retail space back to the street. I'd rather wait a few years and have it done right instead of ruining the place and having to wait decades for it to become the vibrant hub of downtown Hamilton that it historically has been.

This is deja vu! About thirty years ago the NEED Committee of academics, business and trade unions representatives long with the Hon. John Munro made a pitch for the CN Station and accompanying yards as well as near failing downtown areas to follow the Pittsburgh example, specifically referring to the restoration of the Three Rivers development. I can recall that the advocates of cleaning up Hamilton n a rejuvination programme were Mrs Joyce Mongeon, Maurice Carter, Dr Mcivor, Harry Grenwood, Cec Taylor and Ann Jones to name a few. Hamilton
Council dragged its feet then and i will again. It was not that they considered Pittsburgh to be te next Utopia but rather to show how a Steeltown can be revived. Harold Ballard at the time wa one loud voice in opposition no doubt jealous of any attempt to create a Three Rivers complex. Today Pittsburgh boasts Football, Hockey and Baseball facilities and stores like JC Penny, Macy's and Saks of Fifth Avenue. It is a thriving town where the lights burn bright and the sidewalks are unrolled.

Do you think letting buildings sit empty helps promote the idea that Hamilton is a vibrant place to live?

Do buildings that are empty after 5pm and on weekends promote the idea that Hamilton is a vibrant place to live? For that matter, do they do that when they ARE open? How does a bunch of office workers have anything to do with vibrancy? If anything, it's a sign of conformance and routine. I'm preaching to the choir though, I know this.

MattM >> Do buildings that are empty after 5pm and on weekends promote the idea that Hamilton is a vibrant place to live?

From 9-5 they do, not so much after. However, if the alternative is to sit empty, then there's no comparison. If customers in time demand a residential building similar to the Lister Block, I'm confident we have the expertise to build something just as nice, if not better. But to just sit and wait for something to take place is not an alternative, it's stagnation and it leads to a slow death.

Jason, I suggest that next time you do a bit of homework on some of the numbers in Pittsburgh before you go on a rant about how Hamilton should follow the Pittsburgh example just because they have a couple of nice building in their downtown. Consider this data from the US Census Burea:

Jamie, these numbers represent massive economic decline and a lack of confidence in the political leadership of Pittsburgh.
Is this what you want Hamilton to emulate???

In the 4th paragraph in my post I called you Jamie instead of Jason. My apologies. I am terrible with names.

capitalist, no probs. Lol. I figured you were talking to me. My comparison to Pitt was simply in the area of making restoration of old downtown buildings a priority. I wasn't attempting to disect the entire Pittsburgh economy and it's huge problems that had resulted from massive industrial job losses over previous decades. If anything your point drives my point home even more. Hamilton's population is stable and slowly growing...we should be in a better position to encourage the restoration of downtown buildings and revitalization of our core. Pittsburgh is doing this with a slowly shrinking population. Clearly they realize the importance of the downtown.