Really!?! with Meredith and Jarod

On the way to the bus stop today, my husband mentioned that I needed to see a really bad advertisement that's up there right now. It was an ad for the excellent, multimillion-dollar Farmers' Market renovation.

Sure, the ad was a boring stock photo, but I didn't think it was that bad... until I noticed the American money and a few more really unfortunate details. It was bad enough to return photograph this afternoon: 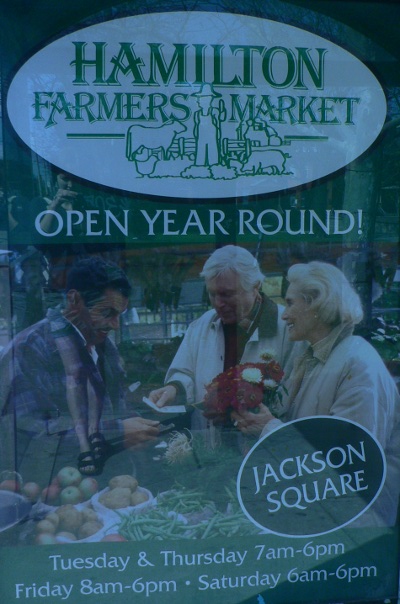 This brings us to a segment we like to call "Really!?! With Meredith & Jarod". Although adapted to suit our favourite SNL format, this has been changed only slightly from our actual conversation.

Jarod: Wow. They're using a stock photo with American money in an ad for our Farmers' Market? And we wonder why this city has an image problem.

Meredith: Really! I know this city has a few issues, but most of us still know we're in Canada. At least for now.

Jarod: And really, Hamilton Farmers' Market, is it all about the seniors' discount? Nothing wrong with the white-haired crowd, but tell me, how is that responding to your consultants' report in 2007 saying you need to appeal to younger shoppers? Could they not have got, oh, I don't know, a stock photo with grey-haired models? Even salt and pepper? Really?

Meredith: Really! And, also, how about those dairy cases in the background? Apparently our Farmers' Market is in the middle of a grocery store. In America. Next to the seniors' centre.

Jarod: Oh sure, from the outside it looks like you get two-way conversion and a glass curtain, but according to these ads, the inside is all about chrysanthemums and dried prunes. Whoo!

Meredith: What I want to know is... who set the cost for this ad? We finally get a multi-million dollar reno - on time, on budget, and high quality ... and then someone says, "You know what, I think we can do the ad for less than my lunch combo cost - and that was Arby's 5 for $5!"

Meredith: If that little voice tells you, "We could get our high-school co-op student to make this ad!" don't think it's a cost-saving stroke of brilliance. Don't.

Jarod: Don't! Although some students could do a better job than that. Really!

Meredith: And listen, boss: if you see a guy who spends most of his time on Farmville and playing with his iPhone, don't assume this employee represents that "younger" demographic you want to attract. He's the guy who'll do the worst cut and paste job! At least you know - or should know - what the renovations are going to look like.

Jarod: And really, who had to give this project the final OK? Who said "Yes, this is how I want people to think of Hamilton!"?

Meredith: Give me a break. Even the guy putting this up in the bus shelter must have thought, "Huh, I didn't know the market was a Mecca for American shoppers, or that this city's been mysteriously transplanted to the Midwest."

Jarod: So, just to give a word of advice, if you ever see American money in an ad, make sure it's for something in America. If it's for something in Hamilton, let's make sure we have Canadian money. Unless they secretly want to attract Niagara Falls' runoff? I can just see the new packages: "Visit the casino! Then buy some eggplant!" I mean, really! We have more than just waterfalls here! We don't need to do that! We don't! Really!

Jarod: Really, this cannot happen again. So, from now on, here's the plan: When this city has the time and money do a truly amazing project, and make it look incredible, and even streetscape and add a scramble intersection... Don't drop the ball on advertising. Spend more than five bucks on the photograph. Don't do a shoddy cut-and-paste stock photo job. Even hire somebody to take a photograph of the actual market. Even the outside of it.

Announcer: This has been "Really!?! With Meredith and Jarod."

Jarod: We'll be right back with more "Update", after these commercial breaks! Stick around!

Meredith Broughton is a pastor to students and board member of the Hamilton Civic League. She is completing two graduate programs, one in theology at McMaster Divinity, another in echocardiography at Mohawk. Meredith lives downtown with her husband Jarod and loves showing visitors and newcomers all the good things Hamilton has to offer.

Nice bit, hope this becomes a regular feature on RTH!

I have never laughed so hard at an article.

The sad part is, I don't think I've ever laughed so hard at something real.

American money, well doesnt that say it all. Unbelievable. Good Catch on that.

Hey if the Americans want to come give us their money I'm all for it : )

With the rising loonie, Americans paying in US dollars may be a "problem" we wish we had.

The ad is awful and the article is funny though.

I didn't think this was funny! and I think I have a good sense of humour (I laugh at funny things alot...) - I must be missing something. I admit I don't watch SNL these days so perhaps the humour is in the relationship to the SNL skit. But as a stand-alone piece, I say keep trying. Dying is easy; comedy is hard.

I find it sad that Hamilton drops the ball so frequently in terms of advertising. We have a ton of space and have an abundance of creative artistic people capable of pulling off stunning effective advertising. Yet we're plagued with "Just Skyn" and "Sex Can Wait" ads on buses and poorly placed Buffalo ads (in bus shelters and billboards across town), not to mention the "You just proved advertising works" on bus benches...ugh.

Instead of conceiving this trash, why not simply replace the ads with a blank canvas and in small TNR font in the middle "Status Quo".

I'm sorry for sounding harsh, but the truth is, there are oodles (yeah I said oodles) of cities that have strong effective ad campaigns that we could even COPY and do well with.

When there were blank spaces on the TTC what did they throw up, some poetry or art. There's an idea. Remember Bill Strickland's talk just a while ago. "Make it beautiful and people will want to be there." - rough paraphrase. Why can't advertising be beautiful in Hamilton?

If I were an employer and I contracted someone to do an ad for me and got some of this stuff, I wouldn't a)post that ad and b)I would fire that person and find someone new.

I wish I knew the way/expenses for doing some of that art/poetry to fill the gaps kind of stuff. I think we would all benefit (even if just a little tiny bit) from it....you know.

Rant Over. My Apologies.