An innovative design by Choi+Shine Architects for high-voltage hydro pylons in Iceland proposes turning them into statues of human figures carrying the lines. 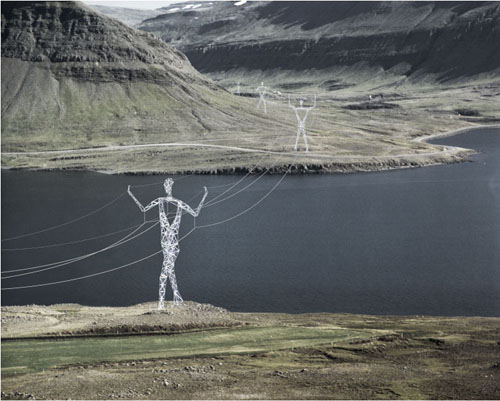 They describe the effect as unforgettable:

Making only minor alterations to well established steel-framed tower design, we have created a series of towers that are powerful, solemn and variable. These iconic pylon-figures will become monuments in the landscape. Seeing the pylon-figures will become an unforgettable experience, elevating the towers to something more than merely a functional design of necessity. 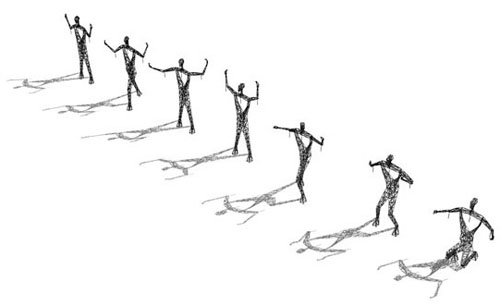 This is a truly interesting demonstration of how the built form of industry and infrastructure can be modified to take on significance beyond just pure functionality. Rather than scarring the landscape, these pylons work with it. They communicate both the immense power of the electricity carried over the lines and the human effort required to transport it across great distances over often-harsh terrain.

Someone has to do this here!

What the hell??? that is freaky!! aliens can see that from outerspace!lol

they'd at least make the post-apocalypse a bit more interesting

Interesting, but I'd rather see more solar panels, than electric lines.

It must be pointed out that power lines use about as much electricity in America as Agriculture (~7%). Because electricity generation is centralized (a conscious choice from the beginning by people like Edison to maximize monopoly profits), we lose massive amounts of energy pumping it along these lines. And then there's the steel, copper, land and other resources (often tons of pesticides) used by them. And the way that major power line infrastructure tends to be decided upon in a lot of the same ways highways are: in order to encourage development, rather than out of any actual need.

The most efficient way to generate power is as close to the user as possible. There's a myth journalists like to report on that we're "suddenly learning that large-scale renewables can be bad for the environment too".

Suddenly? Where were they during the Hydro Dam battles of the 1970s? Many environmentalists hate hydro dams almost as much as coal for what they do to rivers and landscapes.

What I'd like to see is small vertical turbines mounted on all our power lines and telephone poles. Or in areas where it's more suited, solar panels. Don't tell me these giant metal structures built into massive grass clearings don't already have great exposure. As for the VAWT mounts, they could pose these "guys"...have a "statue of liberty" model, a "King arthur" and perhaps even an "Olympic torch runner". Decentralized energy of one form or another is clearly the way of the future, and it would be a shame to let all this infrastructure go to waste.

It wasn't Edison, it was Tesla and it was more about efficiency and safety than it was monopoly. I would like to see more environmentalists studying as much technology as they do biology. If you wanna be a pothead, the least you could do is make yourself useful...just sayin'.