Vrancor Releases Building Plans for Development at Main and Caroline

Vrancor, the company that owns most of the properties in the block framed by Main Street, Bay Street, King Street and Caroline Street, has released a site plan [PDF link] for 150 Main Street West, the site of the former Revenue Canada Building, and 20/22 George Street. 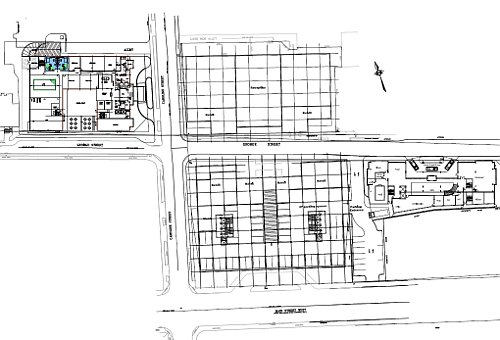 The plan, drafted by architecture firm Desmarais Cousineau Yaghjian St-Jean & Assoc. (DCYSA) and dated March 3, 2011, shows retail along the south side of George Street, a parking entrance and laneway off Main Street through to George, and a combination of retail and reception on the North side of George. 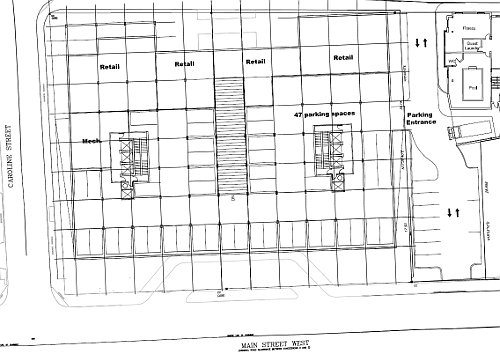 Detail of the plan for 150 Main Street West

East of the parking lane, the south side of George also features a hotel guest drop-off area, with a restaurant at the corner of George and Bay.

After controversy erupted in January, over Vrancor's plan to demolish the old Revenue Canada Building at 150 Main Street West, the company has since proposed partially restoring the west side of the building and preserving its heritage attributes.

The company has not yet released renderings of the plan. The architectural drawing was released this morning to Councillor Jason Farr.

Actions speak louder than words or drawings or architectural plans. Vrancor owns the burned out building at the corner of Hess and King with a tree growing out of it.

Save the tree--and only as much of that boring building as is necessary--the friezes I guess--unless it's structurally sound. but gussie up that bland federal bldg.

Again, he's got my support, but not my confidence.

So why is everything going through Councillor Farr?

Maybe cause in a city like Hamilton, building is politics and you can't get anything done unless you got the ear of your councilor.

Dude come on! This is waaaaay tooo much!

Sorry. I need some clarification: Who are you addressing? Ryan, Desmond, Pxtl... Jeff Bridges? And what is "waaaaay tooo much"?

It appears that the drawings pre-date the decision to keep the west half of the Federal Building. It doesn't look like the footprint as shown in the drawing matches what's on site presently. Certainly that little laneway/drop-off thing off Main St. wouldn't fit in the space that's there presently.

I'm a bit disappointed in the treatment of Main St. It really looks like the plan is to face everything toward George St. I hope the building doesn't entirely turn it's back on Main St... then again, with the traffic there, the complete absence of any pedestrian environment on Main, why should developers treat Main St as anything other than the traffic sewer that it is? Pretty tragic that our main streets are relegated to utility corridors and nothing else.

I was noticing that too...what's with the alley which cuts down the Main St. side? This wouldn't leave much room for the existing structure.

I will belive it when I see it! Vrancor likes to talk but no action his track record speaks for it! Lets see what excuses he has in about 1-2 months time. NO FAITH!

I'll believe it once I see cranes going up. Until then just more talk.

It is sad the amount of big talk we hear from developers and they seem to get embraced by politicos, but grass roots small business has to scale mountains to get anything done.