I ran into Vrancor president Darko Vranich last week near his construction site, and took the opportunity to ask him what's happening with his developments around Caroline and Market. Here are his replies to a rapid-fire line of questions I tossed his way in about three minutes: 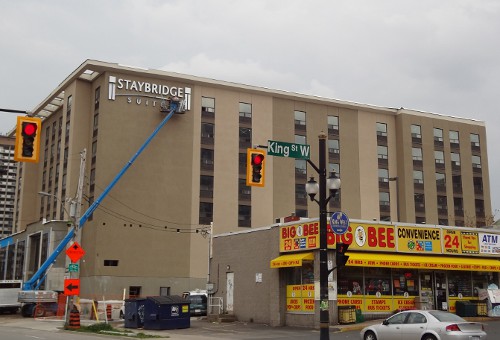 Regarding phasing: no phasing of the project is taking place. A second crane is going up in the next week or two, east of the current tall crane. He says he will build a total of 3 buildings at once.

Five stories of lofts are being added to the top of the existing Revenue Canada building at Main and Caroline.

A 25-storey glass and steel condo tower will be built on the east side of the the Revenue Canada building. 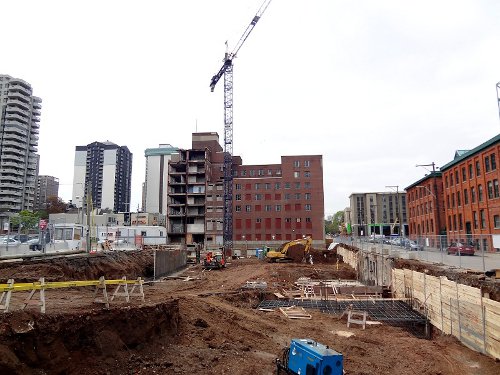 A 17-storey Hilton Homewood Suites will be built on the sliver of land at George and Bay.

He said there will be street-level retail space along George in every building.

There will also be some retail facing Main - but obviously less, due to the fact it's a freeway.

Preliminary ideas include possibly a restaurant in the ground floor of the Revenue Canada Building facing Main, and an LCBO or other larger format store facing Main. Smaller retail, pubs, patios etc.... will be the norm on George in an attempt to link Hess to Bay.

Vranich spoke with the city about cobblestoning George right to Bay, but they said they will wait until all of his construction is done and then consider it. If the city is going to seriously consider doing this, it makes more sense to do it during construction than after it, when the road work will just disrupt the new buildings.

I didn't have time to ask about condo sales. The hotel opens in October and rumours are there will be two restaurant/cafes facing George with patio space.

Would love to see George get a nice pedestrian friendly redesign. is it possible to widen the sidewalks with the 'clean slate' George street has on its north side? Set the new buildings little further back along George's north side?

Oops. I meant south side, not north side.

Jason, I'm a little worried about you. Hanging out in parking lots talking to strangers. Striking up a conversation with Darko, of all people : )

As for Vrancor's projects, I give the company full marks for doing something, especially because it includes residential. Taxes will be paid to the city from the developments and, in the case of the condos, the property owners. More people downtown. More revenue for the city and hopefully for nearby retailers.

Having said that, I'm getting a little concerned that some politicians would have us believe that Darko is the second coming.

He's a developer and his buildings have all the class, style, and artfulness of a, well, developer who is focused solely on maximizing his ROI. That's OK. It''s his money. He's allowed to do that. But let's not fall all over ourselves thinking these styro-stone and stucco boxes are just what Hamilton needs to revitalize itself. The stuff is suburban junk, built to last maybe 50 years. That too is his choice. Thank goodness the Federal building will be the base for one of the buildings. It was never high art, but at least it has some architectural features. That is unless it too gets stuccoed.

What can the city do, if anything, about making sure prominent downtown buildings get designed with some aesthetics, without putting out the developer?

IIRC, there's a group of local architects who want to do something like that for the sake the of the community.

Does this ring a bell with anyone?

Yes, a Design Review Committee as suggested by David Premi and Paul Shaker would do the trick. Councillors Collins and Farr were supportive of moving the idea through city hall. I think it's long overdue. Their role wouldn't be to block or stymie development, but to help developers adhere to the urban design guidelines set out by the city and to make their developments as attractive as possible. Sharply designed buildings are proven to sell for higher prices, gain a good reputation and add to the flair of a city. Boring buildings sell for what boring buildings can sell for.

I specifically asked Darko if the new buildings would also be stuccoed like the hotel and he said no - glass and steel. FWIW

Then seeing as we're on the cusp, I suggest that everyone, if they haven't already, engage city councilors to institute such a Design Review Committee NOW. Buildings, big ones, are going up.

Saw a Tweet earlier today from Hamilton Magazine - apparently the new issue has an article with a rendering of Vranich's Federal Building project. Anybody seen it?

Wonder if its the same renderings found here: http://forum.skyscraperpage.com/showthre...

Thanks for the update. If all goes according to the answers you were given, this is happening a lot faster than I imagined it would (now that the ball is rolling)

Vranich spoke with the city about cobblestoning George right to Bay, but they said they will wait until all of his construction is done and then consider it. If the city is going to seriously consider doing this, it makes more sense to do it during construction than after it, when the road work will just disrupt the new buildings.

If George St. is going to be used as a staging area for supplies and trucks, they're better to wait until after most of the heavy construction is complete, otherwise new paving like that would take a beating. Perhaps that's not the plan, but with construction to occur on both sides of George, it would make sense to use it that way.

I would very much like to see George St. brought to life with retail and restaurant activity.

"There will also be some retail facing Main - but obviously less, due to the fact it's a freeway." Mr. Vranich's words, or the author's?

Here's the exact transcript - DV - "All retail facing George, with only a couple retail units facing Main". Me - "Main is too fast and loud for street retail?" DV - "yes, George is the best street for retail, not Main. Perhaps we'll put one or two larger stores on Main".

Is that really a shock?? Find me any business owner willing to put new restaurants and retail outlets on Main Street. It's not rocket science.

I'd like to see him next, take on the old 4 Buck Saloon, by buying it, the parking lot nearby and replacing it with a Beaver & Bulldog. You couldn't come up with a better name for a place to go after a Bulldogs game at Copps.

According to a report by Emma Reilly on thespec.com tonight, Mayor Bratina informed city councillors by e-mail today that Hamilton will host all of the mens and womens Pan Am soccer games in 2015, a total of roughly 48 games: http://www.thespec.com/news/local/articl...

It is interesting to note that Vrancor is building over $125 Million worth of condo and hotel space in the area of Main and Caroline Streets from which the originally planned west harbour stadium would have been easily visible and walkable.

It would be nice to see similar types of development in the vicinity of the new Ivor Wynne Stadium in time for the 2015 Pan Am Games but this appears unlikely.