Nothing screams safe, livable city like transport trucks getting wedged between buildings in the middle of the neighbourhood. 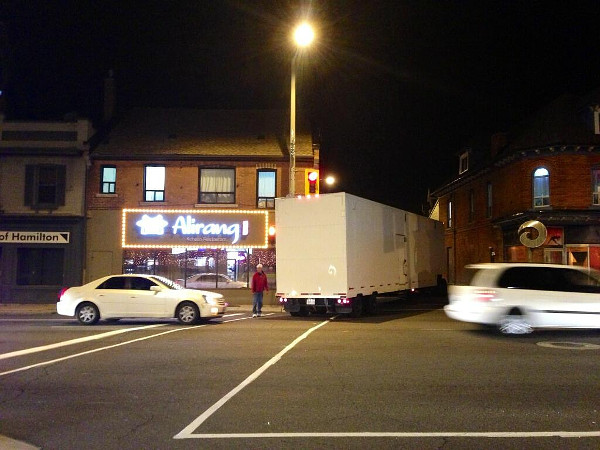 I decided to hop on the bike for a quick spin last night and got to watch this scene unfold on Locke Street at Main Street West. I arrived just as the truck started screeching against the poles. It quickly got wedged against the light posts and buildings.

The driver eventually managed to escape after backing up onto Main Street again.

We have to ask: why on earth is a transport truck trying to turn north up Locke Street North, a purely residential street? Did the driver get lost on our confusing one-way street network and try to cut over to King Street to head back west?

I've been saying this for years: cities that actually care about their residents don't allow transport trucks to drive through urban neighbourhoods. How many more ridiculous pratfalls and close calls do we need to experience before we wake up to this?

Does someone have to die under the wheels of a transport truck before we recognize that they belong on highways, not city streets? (And, by extension, that highways don't belong in city neighbourhoods either?)

Why do you have to be so anti-business? This truck was probably doing local deliveries. Don't know know that your groceries arrive by truck? Cyclists should pay their fair share of the roads. I pay driver license fees - $75 a year. That covers all my road costs! And another thing, there's nowhere to park!

In many large cities with narrow streets deliveries are made using smaller trucks that can handle the required turning radius.

Why do you have to be so anti-business? This truck was probably doing local deliveries.

I totally agree, what if this guy was driving a moving truck for someone moving into one of these residential neighborhoods. To me its not really prudent to 'not all trucks', but it does make sense to design streets in a way that truck drivers would prefer to avoid them as through-routes (e.g. Cannon street vs Cannon Street). Maybe at 70km/hr a transport truck is substantially more dangerous than a car, but at 30km/hr things are different. Even trucks are not 'inherently dangerous'.

Cyclists should pay their fair share of the roads. I pay driver license fees - $75 a year. That covers all my road costs! And another thing, there's nowhere to park!

Cyclists already pay taxes, which fund the majority of infrastructure expenditure as well as policing on municipal, provincial AND federal levels - most of that spending goes to making sure that roads are adequately built out, maintained and policed for car and truck traffic, which requires several orders of magnitude more investment and development than it would to just build roadways that were adequate for cyclists. So despite the fact that we cyclists don't pay license fees, we actually contribute way more to roads than we get out when compared to drivers.

Honestly, in Hamilton the city spends tons of money on roads, money which is sourced from the taxes of both drivers and cyclists, and yet what do cyclists get out of it? An incomplete network of dangerous, deteriorated throughfares on which they have to mingle dangerously with inconsiderate speeding motorists, some of whom honk at them and yell at them to 'get off the road' (though it is actually illegal to cycle on the sidewalk). So lets talk about what is fair, shall we?

Why you responded seriously to what is obviously a satirical comment posted in the classic "troll-spearean" style is beyond me. Having said that, it made the original comment even better. So, kudos!

I honestly dont know anymore with these internet trolls...anyways I'm quite serious about the fact that you can't just say 'no trucks ever'. As the saying goes, "Only a Sith deals in absolutes".

The fix is obvious: Twice as many five-axle trucks.

And five times as many two-axle trucks!

It's not as if it lost a 20 ton steel coil at Caroline that rolled down Main St. and hit the BMO building. Like that could or would ever happen.

The greater crime is arguably the BMO building itself.

Trucks are always allowed to travel by the most direct route to local deliveries. It seems unlikely that this truck was making a delivery to the two block stretch between King and Main, but I suppose it is possible. Nevertheless, the driver should have been able to navigate properly through the turn, or know that it was too tight for his truck.

In Hamilton, most arterial streets are designated "truck routes" by default which allows trucks of any size (including 18 wheelers) to use them for long distance travel, e.g. using Main St as a "shortcut" from the 403 to the QEW Niagara instead of using the freeway ring road (Linc/RHVP or QEW across the skyway bridge). It is the designation of residential and commercial downtown streets as truck routes for long distance transport that bothers many people. The incident of a truck losing a roll of steel on King St is one good example of why this shouldn't be allowed (this truck could have taken Burlington street to the QEW!).

Interestingly, Hamilton does not even seem to be following the guidance from the Ontario Trucking Association in designated so many streets as truck routes: http://www.ontruck.org/imispublic/News_R...

"“The first question municipal planners must ask is whether the existence of a truck route is needed in the municipality,” said Laskowski. “If freight is moving efficiently through a municipality without issue, the development of a truck route is probably not warranted. However, if it is determined that a truck route would be helpful in addressing traffic challenges, there are key issues and stakeholders that must be considered if a truck route is to be successful including clearly defining the problem to be resolved at the outset.”"

With the Burlington St, QEW, Linc/RHVP most of these urban core truck routes are not warranted!

When the RHVP was being proposed one of the arguments in favour was that it would enable the city to take 18 wheelers off downtown streets like King and Main. That hasn't happened.

And the claim that a $75 license fee pays for the full costs of road construction, maintenance, policing, emergency services and the direct and indirect social costs of accidents and pollution is ridiculous (and, of course, most cyclists are also drivers). As pointed out many times on this site, a federal study showed that all income from drivers (directly or indirectly) does not come near to covering the direct building and maintenance costs of roads (let alone the indirect societal costs). Hamilton will spend $100 million this year from property tax revenue on its road system ... paid by drivers and non-drivers alike.

I am really happy to see that for once someone believes that some RTH articles are just blowing things out of proportion. This isn't a big deal, local delivery or not. No one was hurt.

Would it be a big deal if it was your house the truck was wedged against?

Re: "Does someone have to die under the wheels of a transport truck?"

And you want that street to have 2 way traffic on it? LOL...

I don't get how the one way's tie into this mind you I understand it fits with the agenda of this site.

Was their any consideration given that this is a film studio vehicle heading out to the shoots going on in the downtown? No of course not.

Was there something in the article I missed? I don't see any reference to one way streets.

Some writers might have an agenda - the agenda being a livable, economically viable city. How dastardly.

If you want to read a one-way/two-way argment into this article, I'll give you a head start: If you are turning left from a two-way street, you have a much greater radius available to you than if you have to turn left from the leftmost lane of a one-way street.

So thanks for bringing that up, it was an excellent point. You are right, this probably happens less often on two way street networks.

It's written pretty clearly: "Did the driver get lost on our confusing one-way street network?" Maybe slow down a little if this is above your reading level.

Oh you mean the sarcastc quip? Please. That statement does not place blame on one ways. If you can't understand even the lowest form of wit then perhaps you should steer away from this entire corner of the internet.

No, it's that Mr. Leach has, in numerous other posts here, argued for making that strip into 2-way traffic. As is demonstrated here, it's too narrow as it is, and only serves to reinforce that not all pieces of asphalt in our city don't need to be 2 way.

This incident demonstrates neither of those.

It is Main and Locke. Perhaps you are not as familiar with the city as you think you are. That little strip between Main and King is about 1.5 lanes wide there, then grows out to a narrow 2 lanes.

Correct, its King and Locke. Locke St is one way (the truck is going the wrong direction). It looks to be one of the few film trucks from their shoot up the road near Hess.

It is not king and locke, it is main and locke, as it says in the headline.

The Locke Street Bistro is now Alirang, but you can plainly see it's the same buildings.

So again it does not depict king and Locke, I could be worng, however I do not believe I am.

It is Main Street and Locke Street. Just like the article says.

Probably too late to get noticed...but that's a moving truck. The low deck, small wheels in the back, and the lack of rear doors (it's a fold-down ramp) are obvious indicators.

While your comments concerning the use of Main St as a truck thoroughfare might be warranted, this particular incident does not support it, as it could occur irrelevant of the truck route laws.

EDIT It might also be an enclosed car trailer.

It's a movie production truck, as was stated earlier.

Why on Earth people become so suspicious? A truck got stuck - did anybody come and ask what's wrong? What the driver was looking for or maybe he needed help? Heavy cargo transportation has never been an easy job to do. Do not be mean, men.