When the supply of lane capacity increases, the quantity of traffic increases to fill it, eliminating the surplus.

Automobile traffic in Hamilton slowed to a crawl on Friday after a water main leak on York Boulevard triggered a landslide onto the Toronto-bound lanes of Highway 403 between the King and York exits. 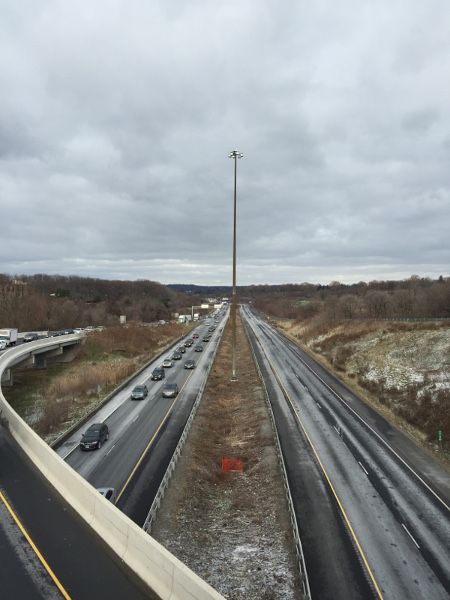 This comes only a few months after traffic ground to a halt when a dump truck with its box raised crashed into a truss on the Toronto-bound lanes of the Burlington Skyway Bridge and shut down the QEW.

It's only a matter of time until people start pointing to these events as reasons to build another highway to provide surplus lane capacity so our network can handle temporary closures with less disruption.

This makes a kind of intuitive sense, but it never works. The only way a "spare" highway network could serve this purpose is if we build it and then hold it in abeyance, not allowing anyone to use it unless and until another failure jams the current network.

If we merely build it and let people use it, induced demand will consume all the spare capacity and we will end up in exactly the same situation we are today, but with a higher total number of people stuck in cars.

Induced demand is what happens when you make it easier to do something: more people do it. It is an instance of the economic Law of Demand, which states that as the price of a good goes down, demand for it will go up.

In the case of transportation: when the supply of lane capacity increases, the quantity of traffic increases to fill it, eliminating the surplus.

The intuitive mental model most people have about automobile traffic is that it is like water running through a pipe. If you make the pipe bigger, the thinking goes, the water flows more smoothly.

Unfortunately, this intuitive metaphor is highly misleading. Traffic is less like a liquid and more like a gas that expands to fill the available space.

Choices in a Context

People make choices in a context of incentives and disincentives, and if you make it easier to drive, more people choose to drive more often.

In the short term, some people shift modes away from walking, cycling and transit when it becomes easier to drive; or they choose to drive to destinations that are farther away since it's easier to get there.

In the longer term, the new highway becomes a catalyst for new developments around the highway interchanges that generate more and longer automobile trips.

We've already seen this with the Red Hill Valley Parkway, which made it possible for developers to build new low-density, car-dependent sprawl on the east mountain.

This, of course, is why the Red Hill was not able to absorb the overflow traffic when the QEW closed: it had already become host to its own traffic. The exactly same thing will happen again if we build yet another highway.

Whereas people looking at the world through our society's pervasive windshield perspective see road widening as the only possible solution to congestion, a more constructive approach is to diversify our transportation network by making it easier for people to choose other modes.

For example, if the B-Line LRT was in service, people travelling locally between west Hamilton and downtown could choose to ride it instead of getting grounded on Main Street West.

After more than a half-century of designing our streets and planning our land use around the assumption that most people will drive, Hamilton has predictably become a city in which most people drive.

According to the 2011 census, 84.4 percent of Hamiltonians commute by car, while just over 9 percent use transit, 4.5 percent walk and less than one percent bicycle.

Over the longer term, if Hamilton becomes a city in which a smaller share of total trips are taken by the automobile, we will not only reap the many large net benefits of improved air quality, lower rates of obesity, diabetes and heart disease, longer life expectancies, lower per-capita road infrastructure lifecycle costs and improved local economic activity.

We will also become less vulnerable to traffic disruptions from incidents that shut down significant lane capacity.

I was never more happy to be able to bike home from downtown on the Waterfront trail than I was on Friday.

Climate change threatens our very survival. Thus, its a moral imperative to find alternatives to use of cars. When will we understand this and act?

I'll go ahead and be "that guy": Factory farming of animals is a significantly larger contributor to global climate change than pollution from cars. It's not just the methane, hydrogen sulfide and ammonia emmissions, either... it's the fact that half the crops we grow are fed to animals, which itself requires massive amounts of diesel gas to move around. Depletion of the water tables is a major issue, too.

What I'm saying is, if what motivates you to change your consumption habits is reducing your harmful effect on the environment, become a vegetarian. Driving 20km to work in a Chevy Volt does almost no harm in comparison.

That's good advice. Bottom line we consume more than we need, and yes, this greed for the finest things in life is killing us.

Source? I haven't seen any good breakdowns of how much comes from each - I know that cars and trucks are a pretty big chunk of the pie, but I don't know how much of that is private vs. industrial.

When we accept that modern life, as we know it, is unsustainable ...

Unfortunately, it will be too late.

What happens after we've reached the point of 'too late'?

And what's your projection for when this point of 'too late' will arrive?

There's a lot of hysteresis in this system - that is, some of the effects are delayed. Warming will continue even if we cut off carbon emissions today, because the damage we did in the past decades is still snowballing.

So imagine droughts and catastrophic weather events getting worse *no matter what we do*. That's the "already too late" situation.

Maybe a few more ice storms like last year would do it for you eh buddy?

Ask the people in Buffalo what too late means. Ask the folks in drought ridden California. I could go on. Read what the scientists are telling us. Of course, you can chose to be skeptical and cynical but that's at your own peril. It's better to accept the reality facing us.

Back to Ryan's article...
What the chaos Friday, and Ryan's astute observations on how some would choose to "solve" things, reveals is this...
We gotta maintain the "old" and be seriously skeptical of the new. If we'd spent our taxes over the past 30 years on maintaining a 50 year old sewer pipe (or the lower, original, City, in general) instead of creating new ribbon-cuttable highways to nowhere, green-field oasis, etc., at the end of them, etc., there would have been no Friday jam. It's like we think we can keep moving to new planets.

The elephant in the room is labour costs. The vast majority of the budget of the city is labour and not large capital projects. If we were more judicious and careful in budgeting, we would have ample funding for major projects.

East of Dalewood space exists for this bike path next to the sidewalk to switch to the south side of Main all the way to Paradise where the current bike lanes over the 403 can be extended west to Paradise. At Dundurn, a parking-protected cycle track can be accommodated on the north lane of Main while still leaving ample capacity for cars. Again, we need balance and quick.

Main St, east of the 403 would become a complete street with bike lanes in the north lane, then street parking, 2 car lanes and a bus lane in it's 5-lanes. If traffic volumes warranted, the north side parking could be a travel lane from 7-9am.

To inject a breath of optimism, I thought I'd leave this here!

There is more change going on than people may realize. For every myopic person who can't or won't think out of the box, there are many people at work building solar plants, fuel cells, ocean wave capture, and many technologies that are going to become established.

Whether it is too late to save our agriculturally friendly geological epoch, I will leave for the more educated to debate. But by changing habits, the worst that will happen is that we'll make the world a better place and have more technology and energy options.

Human nature is a peculiar combination of base animalism capable of virus-level selfishness, and advanced life form capable of wonders and sciences (and application of it) beyond imagination.

So, if you're in the Hammer and feeling a bit left out - be of good cheer! In 15 years when Europe/UK/California have converted to hydrogen-electric trams and buses, they can sell us their secondhand electric transit vehicles!

None of that solves the congestion issue that a growing population brings with it, so whether or not one wants to hear it, transit right-of-way, and cycling/scooter network, is also coming, whether we fight it initially or not.

be of good cheer! In 15 years when Europe/UK/California have converted to hydrogen-electric trams and buses, they can sell us their secondhand electric transit vehicles!

They may try to sell them to us in 15 years, but we'll hyperventilate, discuss, debate, study and do nothing for at least another 15 years since electric trams don't jive with 1970's planning.

I suspect in 15 years we'll be seriously considering ways to widen the traffic lanes on Main and King before we're doing anything resembling a proper city.

Kidding aside, the political cycle seems to be a big risk to projects in this region. The cycle of starts and stops. Every few years back to the drawing board. An informed vision that spanned across party lines, would be a dream, and would have a better chance of getting completed. With cities co-operating. A golden horseshoe city with a university and two colleges should get its A and B lines looked after and should have been all over a free LRT. I thought The Big Move was supposed to be what I just said above.

So back to kidding for a moment, I could see a scenario where just as we're done electrifying tracks, a newly elected government starts ripping them up again.

From what I hear, new intensification developments are being asked to set back farther, so this is probably true.