Approve and Improve the Bus Lane

Killing the bus lane would be deeply unfair to the thousands of Hamiltonians who rely on it and demonstrate that Hamilton is not serious about improving transit or planning for the effective transportation our city needs.

I urge Council to keep the bus lane on King Street that has been tested as a pilot project for the past year. 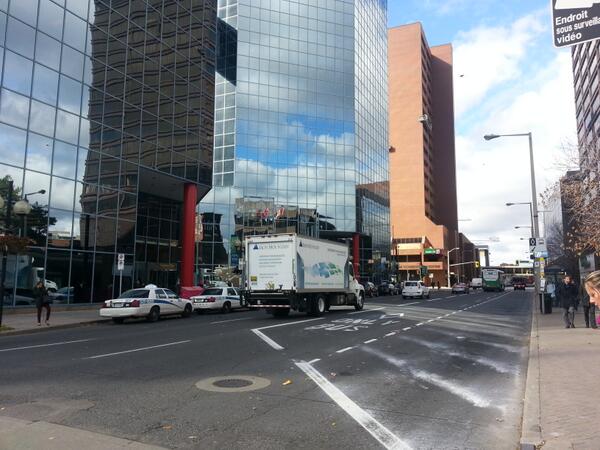 In December, Council prudently decided to wait to receive the staff report before making a final decision on the bus lane despite complaints by some residents.

The staff report is very clear: despite the impressions of some people, on all important measures the bus lane has been a success and achieved its objectives. It has significantly improved bus service while only increasing motorist travel time at rush hour by a few minutes.

The pilot project did identify some deficiencies of the design that can be easily rectified - restore curbside parking to the north side of King west of Bay and add signal priority for buses - and these changes should be adopted.

Most importantly, the report makes it very clear why the bus lane is justified and fair:

Again, I urge Council to vote to keep and improve the transit lane.

Not doing so, when the staff report tells us it is urgently needed and is successful, would be a waste of taxpayer dollars and deeply unfair to the thousands of Hamiltonians who rely on efficient transit every day.

It would also say loud and clear that Hamilton is not serious about improving transit or planning for the efficient transportation network our city needs to thrive in the future. We need to have the courage to start making these changes now. As the staff report says:

Similar, and much broader, recommendations were made in the 2010 HSR Operational Review by IBI Consulting, and in the the Rapid Ready report adopted by council in 2013. It is now time to start acting on these recommendations!

This article is adapted from a letter to Council.

Email council in support of the bus lane people!

I am a downtown business owner, living in Ward One. I commute every weekday to and from work, by car, by bus, and by bicycle; usually along Main Street in the morning, and by King Street in the afternoon or evening.

I also frequent downtown at other times. I've had a lot of time to watch the Bus Only lane at work over the past year.

It's worth keeping. The overall benefits to commuting (remember, please. that as the report shows, as many commuters use that lane alone in rush hour as drive King Street) are significant. The inconvenience is minor at best: as an example, on this past Monday, I noted that at 4:30pm on a rush hour Monday in bad (very cold) weather. traffic moved smoothly and at the speed limit along the whole of King Street.

I want our downtown to grow. Part of me locating in downtown Hamilton was to support a growing and underserved business community. Projects like this one are, in the end, aimed at helping downtown be a destination and not a freeway to drive through. I want this to continue. We must consider city-building in all our transportation decisions!

I encourage you to vote to keep the bus-only lane. It's better for all commuters and vastly better for downtown business.

The real reasons behind your councilors opposition to a simple bus lane is quite clear actually, its political opportunism. By opposing a simple common sense transit measure like a painted bus lane (simple in most cities anyway), the councilors are or have already learned to play a simple political game. Regardless of a their own feelings about transit in Hamilton, they figured out that more people who vote don't ride transit vs. people who do vote and ride transit. It therefore becomes easy to criticize the whole project. A politician who can be seen as useful to his/her local voters and now the business community as well because, they support getting rid of something that has caused difficulty for the business community in downtown Hamilton. The actual difficulties are quite basic, more than likely, delivery vehicles, salesman and anyone else who used to be able to just park their vehicle at the side of the road (regardless if its legal or not) now have to find somewhere else to go and thus their lives just became more difficult. Adept local politicians looking to build their brand or expand their existing group of supporters, jump on stuff like this.

As a planner myself I see this all the time. Politicians calling planners and in effect the entire Hamilton Planning Department corrupt because they support the idea that, there has to be some places where the way things have always been like, virtually all road space belonging to cars and trucks, now has to change. The brief confusion this change will cause are usually followed by the best examples where these types of politicians thrive and cause mischief. This is one of the ways how Rob Ford got to the Mayor's Chair in Toronto. It doesn't matter now to the politician that, these Bus Lanes will improve the performance of the Transit System and add to the efficiency of the remaining vehicle lanes. All that matters is that, the business community is in need of help and he/she will provide it, making a lot of political and real noise in the process. For those in the downtown business community, these changes that the bus lanes brought in may actually be causing real problems but, nothing that can't be solved with more communication between the community and city planners. Organizing the road network so that transit and private vehicles moves more efficiently helps everyone including the business community.

Bus lanes are pretty common in North America, so are their positive and negative effects. Bus lanes concentrate more transit riders and increase actual transit capacity, by increasing the average speed and the shortening of the journey time of individual transit vehicles. Crowding or increased crowding on the buses is evidence that, there may not be enough vehicles on the line and that more resources need to be spent on them (yes, spending money on transit, how revolutionary). The concentration of transit riders has a spillover effect, more customers for local businesses. Mainly because they can see them and easily access them by walking up to them . It has been proven car drivers will not stop at local businesses and get out of their cars unless, they can easily roll into a large parking lot with high speed or higher speed entrances and exists that, a downtown environment normally just doesn't allow for the most part. Most of the problems these bus lanes cause are mostly about the change of access by cars and trucks. Great care has to be taken in showing where, people whom would normally access these lanes by car or truck can now stop. These alternative places have to be clearly shown and be low cost. If the vehicles have to stop for a significant time a major financial penalty must not be incurred. Traffic flow issues in these bus lanes or in the remaining vehicle lanes can be dealt through other means.

I just sent email below:

As a Hamilton resident and tax payer, please accept this letter as an expression of my strong support for the King St. Transit Only Lane to continue with the modifications proposed in the staff report. In fact, I would be happy to see the lane extended even further as the report indicates is one option.

I have asked Councillor Collins on two past occasions to kindly share his ideas on alternative options with respect to how to spend the promised provincial funding for Hamilton’s rapid transit, but have not yet received a response. However, I would be interested in hearing an alternative to the LRT plan from any Councillor opposed to LRT so I can assess its merits and offer support for or against it.

I believe it is fine to argue LRT is not tenable option for financial reasons, but with the promise of funding and funding going towards other cities in the meantime, it is irresponsible to not have a plan B with respect to our transit needs. Status quo will not work, nor is it in keeping with the City’s stated vision.

Once again, I urge you to please consider the said staff report along in the context of the present and future needs of our growing City. Thank you.