The agenda for the January 14, 2015 General Issues Committee is up, and as expected it includes the staff report on the King Street bus-only lane pilot project. 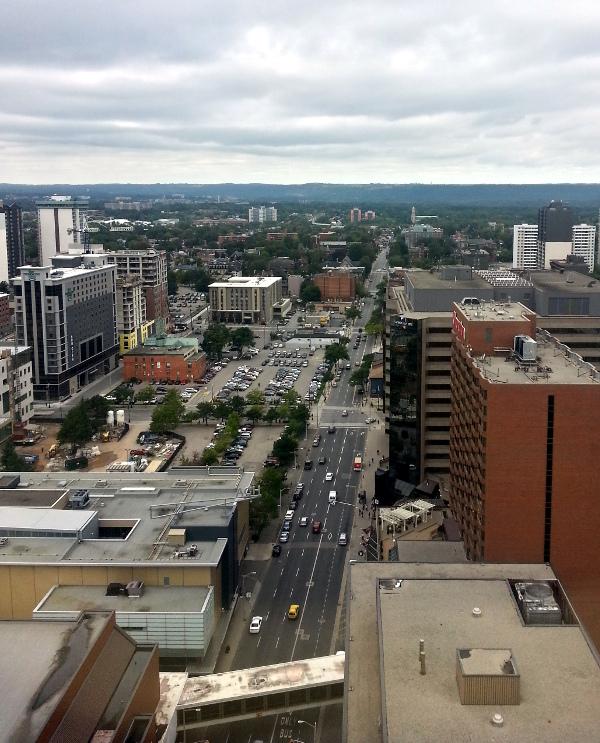 You can download the report files (sorry I can't include direct links to the files, because ugh).

The bus-only lane runs for two kilometres westbound on King, starting at Mary Street and stopping just before Dundurn. The capital cost was covered by the Province of Ontario out of the Metrolinx Quick Wins capital fund.

The City received $300,000 in Quick Wins money to install the pilot, and has spent roughly $184,000 of that money. There is enough money left over either to implement staff recommendations to improve the bus lane or to cover the $100,000 cost to remove the bus lane altogether.

The report recommends either making the bus lane permanent or extending the pilot. It also recommends modifying the lane to improve overall traffic flow, provide transit signal priority and restore curbside parking on the north curb of King west of Bay Street.

In December, Ward 5 Councillor Chad Collins proposed killing the bus lane and giving drivers "an early Christmas present)", while Mayor Fred Eisenberger proposed asking staff to come back with some recommendations on how to fix the identified problems.

Council decided to hold off on both motions. Interestingly, Mayor Eisenberger's motion is on the agenda for January 14 but Councillor Collins's motion is not.

But for all the identified issues with the bus lane, the staff report makes it clear that it got some things right:

Of course, there was also some negative feedback:

The recommended changes, which can be funded entirely out of the unspent Quick Wins fund, should alleviate most of these concerns - especially the concerns of retail business owners.

The report includes one of the iconic overhead photos of the amount of road space used by a group of people on a bus compared to the same number of people in personal vehicles:

Road space for a group of people by mode (Image Credit: Planetizen)

Unfortunately, the city has mostly failed to achieve its goal of improving the HSR and growing ridership as a share of total trips in the city. (Jason Leach explores this in more detail in this article.)

In fact, the number of annual rides per capita only nudged from 40 up to 45, while the transit mode split increased form 6 percent to 7 percent.

As the bus lane report notes drily, "This suggests the City is lagging behind significantly in meeting its goals."

It further notes that if the City fails to drive a significant growth in transit mode split, we will be forced to spend vastly more money on increasing vehicle lane capacity.

Unfortunately, our Council seems to be mostly blind to huge outlays on road infrastructure, while simultaneously boiling the ocean over comparatively tiny investments in active transportation and transit.

Council's decision on the bus lane is an important opportunity to demonstrate whether they're actually willing to put the City's impressive plans into action.

Kill the Hamilton highway, the Downtown core should be a destination not a throughfare

Since, when did a staff report ever get in the way of councillors...

I hope Councillor Chad Collins reconsiders his moronic remarks and position on this issue. I'm certainly not voting for him next time around if he keeps this nonsense up.

The City counted the number of vehicles and bus passengers at King and Bay during morning rush hour, and found that the bus was carrying as many people as the three vehicle lanes combined (1,104 passengers and 1,190 vehicles).

fantastic report. Can't wait to see which councillors try to ignore all the facts and city-building direction from staff in order to appease the 38 people who complained within the first month of the bus lane opening but have adjusted fine since.

Why build a real city when you can play games and politics with our quality of life and future.....

I'm shocked at those ridership gain numbers. It seems to be the same across this city now with potential cyclists, transit riders and folks wanting walkable streets: a HUGE pent-up demand and a massive segment of the population just itching to walk/bike/ride transit more if city council could somehow drag themselves out of the 70's and provide safe, reliable, convenient cycling networks, transit routes and walkable streets.

To have 20% growth happen with the city doing nothing is astounding. Imagine if they seriously invested in the B-Line corridor with transit signals, transit lanes and headways to eliminate crush-loads? That corridor will account for over 50% of the entire HSR network soon. Even more if we invest in it.

Staff are correct in their assessment of us (meaning council) lagging behind and needing to get serious about our future. The general populace is ready and waiting for a livable city. When will council do their jobs and provide one??

"To have 20% growth happen with the city doing nothing is astounding."

While the 20% growth, 2009-2014, throughout the Main/King/Queenston corridor is compelling, it is frustrating that this report doesn't use this data as context for TOL-specific data. The corridor in question could apply to a large number of routes travelling a wide stretch of the lower city (and, in the case of the 5C, beyond). That supports the 20% growth claim, but offers nothing related to the advent of the TOL. If ridership is up 20% across the entire King/Main/Queenston corridor over the five-year sample, what share of that growth can be attributed to the King TOL lane from Nov 2013-Nov 2014? How did ridership growth along King change during that Or it may be that the knock-on effects of the TOL led to ridership growth throughout the corridor. The closest we get to a sharp picture is the pre-/post-TOL analysis charted out in terms of 1 King schedule adherence, though performance on other routes using the corridor are not analysed in a similar fashion.

Problem is too many old farts. They make up the majority of voters. Hence, council only really effectively represents the old farts.

Please don't be ageist. Ageism bugs me. I'm possibly part of the demographic that you would identify as "old", but support progressive policies for Hamilton (and Canada and the world). I'm much more liberal than a lot (all) of my nieces and nephews. Age has nothing to do with political views.

I was only kidding, a little bit. Age obviously has nothing to do with progressive thinking, necessarily speaking. Peoples mode of thought and behaviour are often just a result of the times they live in. How do we get more folks in the older cohort thinking differently?

But my point is that it's NOT the "older cohort" you have to concern yourself with. There are many, many younger people who think conservatively. As I said before, I'm related to some and work with others. I also belong to a community organization with older-age liberals.

Some people are half my age, but automatically take the conservative line. Why? Possibly because they don't have critical-thinking skills. They may read one article or just a headline about an issue and make up their mind from that. Headlines on the bus lane are a good example of the consequences of this style of decision-making. If you made up your mind just from reading headlines, you would think the bus lane was the most evil idea to ever be imposed on our city. What are we waiting for? Get rid of it!

The mayor's race in 2014 was a good example of surprising outlooks in the different age groups. Brian McHattie, one of the "older" candidates had the most progressive platform. While the youngest (I'm guessing age here), Crystal Lavigne was only marginally more progressive in terms of transit/streets than Brad Clark.

If you assume you know my political outlook based on my age, we'll waste a lot of time getting past that assumption before you realize we're on the same side.

"annual rides per capita only nudged from 40 up to 45"

Unless you are referring to the City's municipal benchmarking reports to the Ministry of Municipal Affairs, which show per the HSR's capita ridership tumbling from 48.58 in 2001 to dropping to 44.80 in 2013 (a modest improvement on the 2008-2013 average, 44.7 annual rides per capita).

Going by the CUTA numbers, the HSR's service area per capita ridership has gone from 40 in 2001 to 44.5 in 2007 (cited in the IBI Operational Review and, significantly, the year of the Transportation Master Plan that "includes an approved transportation strategy which places a high emphasis on significantly improving transit services:) to 45.1 rides per capita in 2011.

back when we established our goal of 12% mode share, I complained about how pathetically low it is. Now I would think we were Vancouver if we hit 12%

You get the city you plan for....in reality, not on paper

Is it so hard for so-called 'news' organization to read the report? They say the report "doesn't say by how much ridership is up along the King corridor". Lol

Whitehead should have to apologize for comments like this, assuming it's accurate and not more old-fashioned media spin.

So Whitehead accuses staff of not being objective? Pot meet kettle.

When councilors like Terry Whitehead and Chad Collins speak, it makes me depressed about the future of Hamilton. They aren't even trying to disguise their apathy or contempt.

I get that and it's one of the reasons I've all but given up on significant change happening anytime soon in greater Hamilton to focus on things close to me.

But really the most depressing part is they both get over 70% of the vote.