Ideas to Recall Our Streets from Boulder, Colorado

In Boulder, Colorado, they have 'recalled' dangerous highway-style slip turn lanes to slow traffic and make it safer for pedestrians and cyclists to cross.

In Boulder, Colorado, this is how they have "recalled" dangerous highway-style slip turn lanes to slow traffic and make it safer for pedestrians and cyclists to cross: All such intersections are designed this way in the area around the University of Colorado Boulder.

Some features to note:

Note that the signage is directed entirely to reminding motorists of their duty to yield and slow down, and then making it physically difficult to turn quickly.

Apparently, Ontario regulations now allow yield-to-crossing-pedestrians signs at such slip exit/entries. This would be a good way of implementing them, for example at Queen and Aberdeen or the quasi-slip exit at Queen and Main. 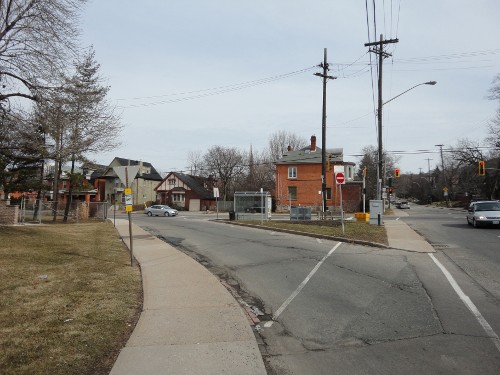 Boulder also has zebra crossings at normal intersections, and a sort of "courtesy" crossing at uncontrolled intersections on arteries with cheap flashing yellow LED lights and a vocal warning for pedestrians that "motorists may not stop", but also signs telling motorists that they should stop when the lights are flashing. Note again that the signs to motorists are unambiguous: "State Law: yield to pedestrians in crosswalk". The vocal warning would not confuse motorists and there is a refuge in the median for crossing pedestrians.

How could Hamilton even suggest such a dangerous passive-aggressive "solution" as to have no signs to tell motorists they must yield to crossing pedestrians, but signs to pedestrians that are visible to motorists, essentially saying that motorists don't have to yield - which isn't even true?

Remind Drivers of the Law

Hamilton could have the same signs at its courtesy crossings as Boulder has: "Provincial Law: motorists must yield to crossing pedestrians".

That is, after all, what the Highway Traffic Act says. Once a pedestrian begins to cross, motorists must yield.

Adding clear reminders at such crossings would be a good way to start changing driver behaviour to be consistent with the law.

Notice the different in lane width on the highway style ramp lanes too.
Lane width has been proven over and over to have a direct correlation to vehicle speeds. There's a reason you feel comfortable doing over 100km an hour on the 401. And you don't on James North.

Narrow lanes are being implemented all across N. America. Personally I'd rather see intersections like Dundurn and York, Main and Dundurn, Queen and Aberdeen just made normal intersections with the old triangle piece given wide sidewalks, trees and plantings.

But this is a decent alternative. To me the most important pieces of the Boulder example are:

Just those elements alone would create a much safer walking and cycling environment in Hamilton.
Cars wouldn't be able to maintain 55k around a corner in a residential neighbourhood. Novel concept.

Not a fair comparison. Our winters are milder and wetter.

Very attractive signage in Boulder I must say!

I think the reason Aberdeen and Queen is the way it is is because the Radial line from Niagara to Brantford used to run through there. When they tore up the tracks, they eventually sold the land for housing. You can trace the route by following the newer houses back from the Chedoke golf course.

That track used to cross Queen on an angle, and when they tore it up it did not leave enough room for multiple lots so they permanently eliminated the corner from development. Now there is an apartment complex to the north west. I don't think is was nefarious, it simply expedited the traffic on Queen, a major access to the mountain particularly during Rush hour. It also allows the bus to stop at the corner heading up the hill without impeding traffic turning right. So it makes sense.

Do you know how many accidents occur at that intersection?

From my perspective, the corner of Markland and Hess is far more dangerous. You have traffic headed north and south bound with Major buses, with obscured vision to the East from the southbound lanes and bike traffic heading the wrong way on a one way street. They used to have a high collision warning sign at that intersection but it seems to be gone. Not sure who had the bright idea to have bike and car traffic on Markland operating in opposite directions.

I would be interested in knowing how many accident occur at that intersection as well. Maybe Markland should be a two way street and the parking at the corners should be reduced. I think someone is eventually going to be killed there and the City would loose a negligence claim based on the engineering.