Trail from John Street to Claremont Could be Great

With some serious TLC, this trail could be an excellent active transportation connection up and down the escarpment.

With the recent RTH discussion about bike routes up and down the escarpment, I noticed that there is an additional mountain access that rarely gets talked about. I don't even know if it has a name. 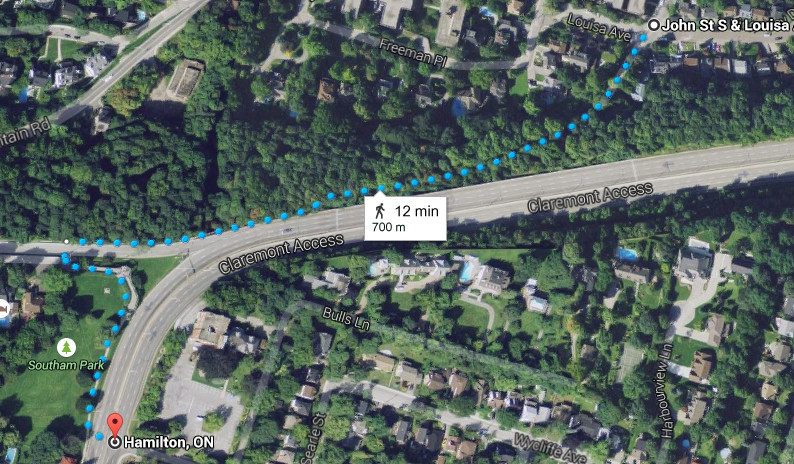 It runs from the top of John Street at Louisa Avenue beside the Claremont Access to the top of the James Street Stairs at Southam Park.

After the discussion on RTH, I noticed this trail on Google Maps and decided to go explore it. It's quite a sight. I didn't take pictures, but RTH editor Ryan McGreal took some yesterday for this article. 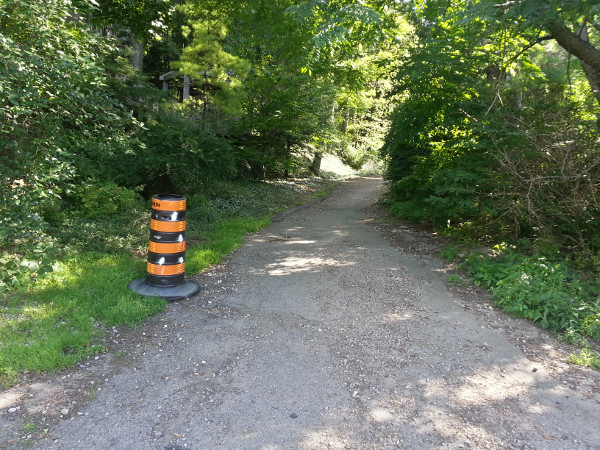 It is paved for the first 80 metres or so, after which it switches to loose gravel and sand. 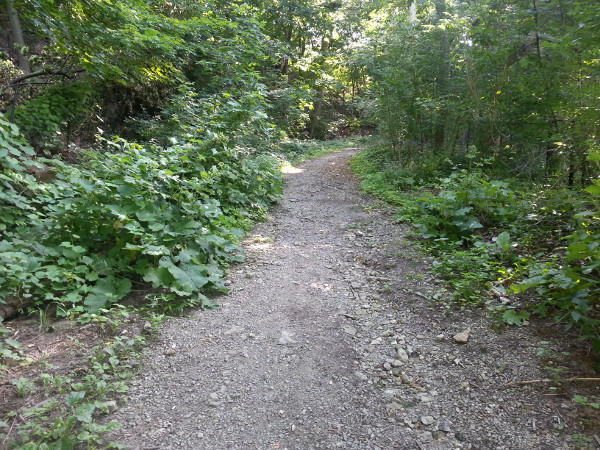 It bends west and runs diagonally up the escarpment at a fairly steep angle. 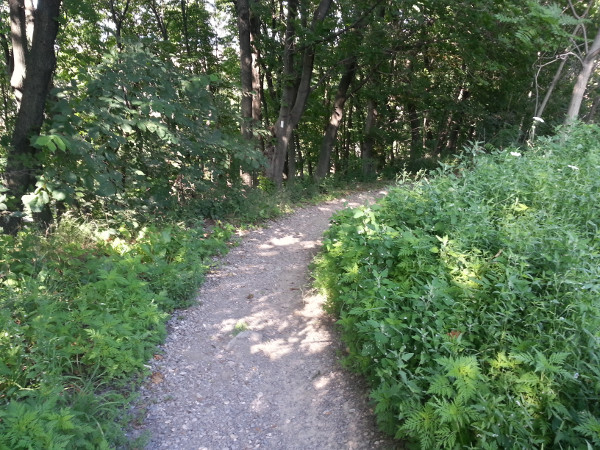 Closer to the top of the escarpment, it pulls abreast the Claremont Access and runs parallel to it the rest of the way up. 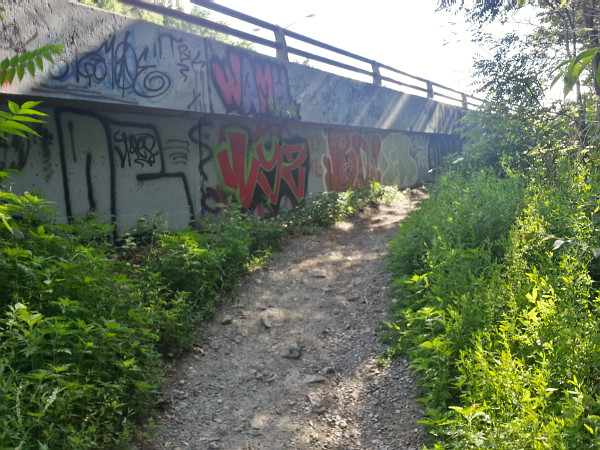 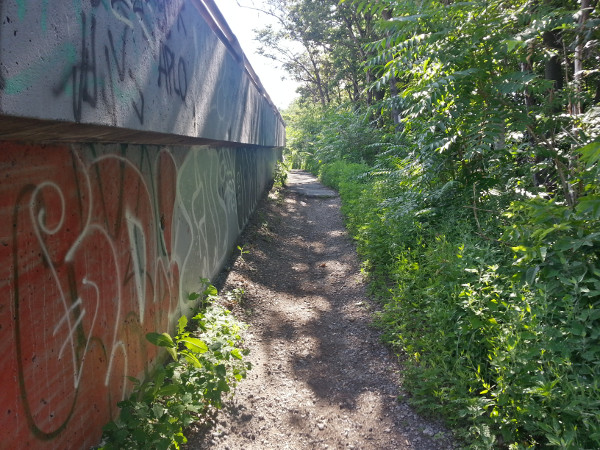 The trail angles up a ramp with a guard rail to become level with the Claremont. 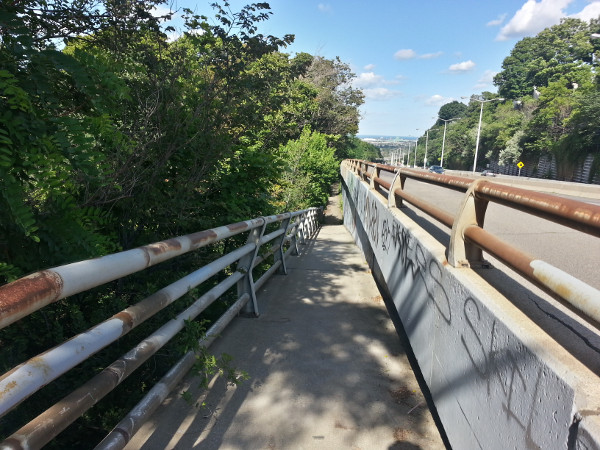 At the top of the James Street stairs, there is a gap in the jersey barrier blocking the Access, but the gap has been covered by a bolted-on highway guard rail. 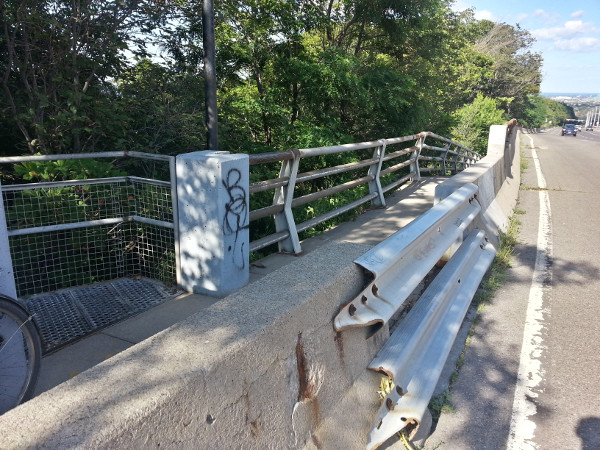 Blocked gap in barrier at top of James Street stairs

A bit farther west, there is a proper opening in the jersey barriers across from a short staircase that leads up into Southam Park. 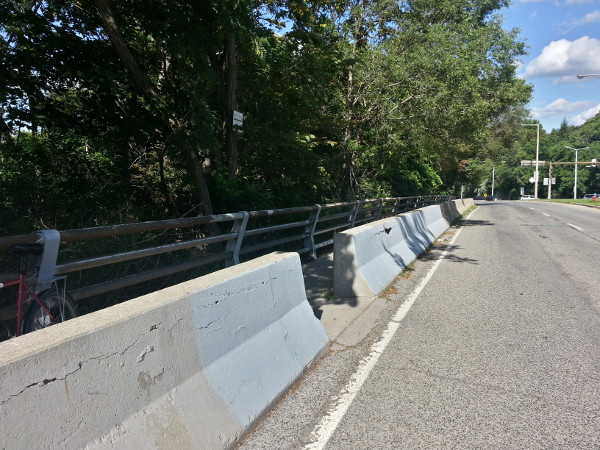 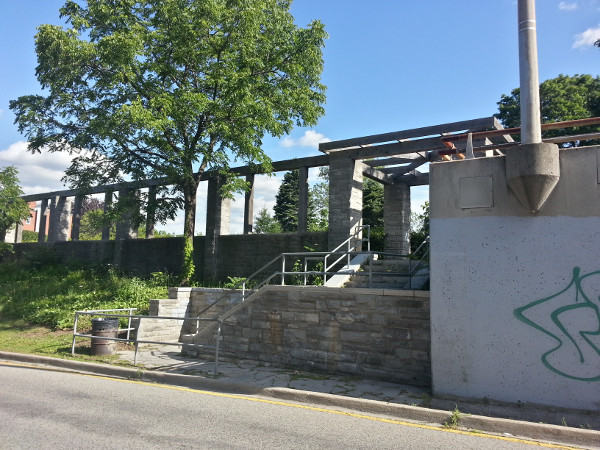 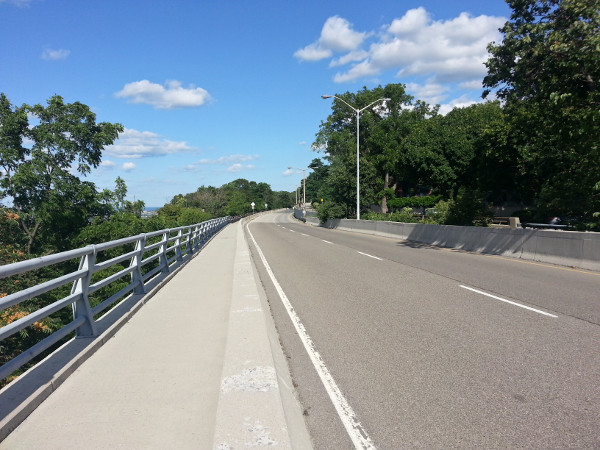 Sidewalk next to Claremont extension over to West 5th

The Good, Bad and Ugly

First off, the good: It has almost no stairs. Walking a bike up this trail is totally doable, and riding it down is as well, provided you're squeezing the brakes the whole way.

On the other hand, the bad:

The new endpoint of the James Street stairs is a bit west of there and, of course, involves stairs.

Right now the City is asking for feedback about the City of Hamilton's trails as they relate to the Trails Master Plan.

This route is identified as the "Chedoke Rail Trail Claremont Link (2-4)". I think this one could use some serious TLC and provide a great service to Hamilton's cyclists and hikers (and wheelchair-bound folks?).

However, the master plan identifies it as "Phase 3" which means it's low priority. The one single mountain cut that has no stairs for pedestrians and cyclists. Well, almost no stairs, and only has no stairs because figuring out how to get people across the West 5th leg of the Claremont without stairs was too hard.

Martin Zarate is a software developer who lives in Westdale with his wife and three children.

This could be manageable on a SoBi bike as well, too, with some minor upgrades, and publication on maps.

We should put bike maps on SoBi stations showing Hamilton's emerging cycle network, helped by the heatmapping and the fixing of dead-end bike lanes (better Hunter-Stinson connection! I became almost lost on my SoBi last night when the Hunter bike path deadended eastwards on Hunter and bike path directed me to a right-turn into something almost dead-end before I had to pull out my phone and double-check how to get to Stinson.

Even as a car-owner -- I notice Claremont Access is quite wide (7 lanes at widest!) and that's pretty overkill. Even myself (bike-lover/LRT-lover/2-way King-Main advocate) can support a LINC/RHVP widening to 6 lanes, YET Claremont Access was excessively engineered since there's no 7 lane throughfares at the bottom or top. It would have made more sense to have more accesses rather than one massive access. Cars, bikes, people (especially many older who can't walk stairs). One lane could be reassigned to cycling (via putting jersey barriers on top of of the dashed lines) and building a scenic lookout bay for resting/water fountains halfway up the mountain. Perhaps not this decade or next, as there's never a peak hour even with the temporarily-narrowed Claremont Access.

Fix the retaining wall, but don't reopen the closed lane; instead fancy-it-up and reassign it to pedestrians and bikes (but protect the bikes with a jersey barrier) with a scenic lookout bay with water fountains to make it worth an attraction. Only when the bike culture grows big enough (i.e. 5-10-20-30 years?). We got many budget priorities, alas...

Fixing this cycle path would be a huge improvement to mountain access for bikes (with zero pissing-off car owners) -- for much cheaper.

Signage is evident as one of the big failings of our nascent bike network. Many popular routes involve many turns and are completely unsigned, or signed with an ambiguous "BIKE ->" sign that doesn't tell the rider where they're going

I used to live right near the top of this, and still visit there often. We alternate taking the stairs or the path when walking up/down. Haven't cycled it as much lately though, but I rode down a few weeks ago! The uphill ride would be much more doable if it was paved, though not impossible right now with a good low gear. There would be a HUGE temptation to ride REALLY fast downhill if it was paved! :)

The covered gap in the jersey barrier is somewhat recent (well, relative to the age of the path). There was no gap at all in the 80's and 90's. I think the gap was installed in the early 2000's around the time of the World Cycling Championships. Seems they blocked it off again not long after. (I may be fuzzy on that timing...I didn't live there then) In some ways, I feel much safer crossing the street where that closed gap is, because you can actually see the traffic coming up the mountain. The current crossing can be a bit hairy, especially with some of the really fast speeding cars that you can't see approaching.

I truly love the idea of making half of the Claremont->W5th road a cycling path. As Ryan mentioned, there's really no reason for it to be two lanes. It doesn't even seem as busy as it used to be in the 80's/90's. If that connected to an improved John St. trail and Claremont Access bikeway.....wow!

Think big: separated two-way cycle track on Wellington from Burlington St to the Claremont Access, then a Trampe Cyclocable up Claremont to West 5th to Fennell (at least).

Would provide a safe bicycle route between the waterfront and the mountain, passing two hospitals, our community college, and the east-west Cannon cycle track along the way. The CycloCable would make the upbound route usable for less dedicated cyclists.

Great ideas, if there's at least a small rest area (water fountain and scenic lookout). A mid-path scenic lookout bay protruding southwards somewhere part-way up Claremont Access -- with a water fountain in the middle. I don't think the bike traffic warrants the operating costs of a bike lift, but if a simple Cannon bike path treatment (plus Jersey barriers for safety!!) is done, I'd use it a couple or three times per summer with a SoBi. Especially for a downhill ride. :)

Only after much-needed city funding priorities, because we'd probably have to expensively fix the broken retaining wall problem first to free up a car lane before taking a lane away again for bikes. (Realistically -- zero lane takeaway is probably the only way our council can get along with installing bike paths on Claremont). And even so, let's first get citywide SoBi and we've given our city bike routes the Minneapolis-style BikeWays treatment.

So, initially improving this 'secret' bike path first as an initial cheaper move.

Even as a car-owner, this access is overkill. Claremont Access was actually designed as 7 lanes wide but only 2 lanes are in use per direction, and this access doesn't even currently slow down during rush-hour. Unused peak capacity can be reassigned.

I walk this trail almost every day with my dog, from the bottom to Southam Park at the top, or continue on down the extension to hop back on the trails near the top of west 5th. The tree canopy provides a lot of shade, but as you mentioned, it's incredibly dark starting in the evening, well before the sun actually goes down. Halfway up, there's a little trail offshoot that veers back downwards alongside the claremont, and it's even more narrow, and takes you sometimes alongside a completely unprotected section of the Access. You're elevated compared to the road, but that would only serve to give you more speed should you slip and fall... This trail appears to terminate underneath the intersection of the Claremont and Arkledun Ave, so you can wrap around to the sidewalk on the north side of Arkledun and have busses and cars buzz you at 75 km/h. From there you either walk back up the escarpment toward Sam Lawrence Park, without protection for a while, or back down Arkledun toward John.

One interesting thing about this original trail is the sheer terror that comes with trying to walk it in the winter. If there's snow, you're mostly fine as it provides traction, but it turns into an ice slick so smooth and steep that should you be with a bike, or a dog, or a child, or without a deathwish, walking down the stairs is your only safe option.

The area certainly needs better pedestrian facilities. In this Google streetview shot, you can see a pedestrian at either side maneuvering the area with no clear links between. http://bit.ly/1elQ5zB

Never attribute to malice that which is adequately explained by stupidity.

This trail is great the way it is!
Lightly travelled, shaded, narrow, QUIET!

I'd rather not change anything about it. It's a great little getaway amongst the asphalt ocean.

As far as I can tell, this was actually a toll road and the first mountain access in the mid-19th Century before the Jolley Cut was built in 1873. There's a bit more info in Bill Freeman's book Hamilton: A People's History.