Check out the following list and map of how our City Councillors voted last night on the 15 cent HSR fare increase. 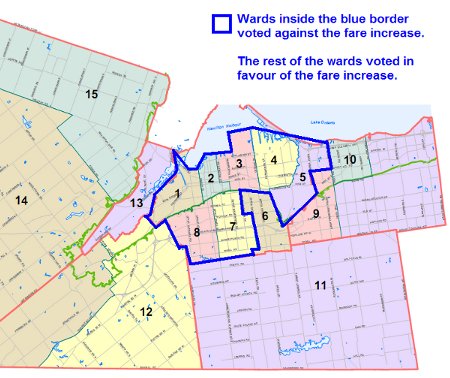 This is exactly why we need to get rid of area rating. The suburbs don't pay their fair share to begin with, and then they all vote together against the urban councillors to keep jacking up the fares.

I warned of this after amalgamation. We have more suburban wards in Hamilton than urban: what a great way to run a city of half a million people.

People who don't actually live in the city and don't know a thing about cities are voting on critical urban issues.

If Tom Jackson - the ward 6 bite out of the urban area - had a clue the increase would of died in a stalemate.

Also what a disappointment is Mayor Fred! When push comes to shove he breaks for the suburbs. He doesn't want to fix area rating because it's 'too divisive' but he's willing to throw the old city to the wolves.

Here's a city that has an enormous poverty problem. A city that wants to claim "the best city to raise a family", they should qualify that statement with "So long as you can afford your own vehicle".

What a shame that our council knows that this largely hurts the families/individuals already struggling financially. Take this to your Poverty Roundtable do-nothing discussions.

Jason's logic just doesn't make sense. If anyone it should be the underserviced suburbs that should be crying about fare increases. Having to pay more for lousy service ins't exactly a suburban plot against the city which gets superior service....give your head a shake!

Suburban, area rating is EXACTLY why the suburbs have less transit than the old city. Because of area rating, the suburbs pay only a quarter or a fifth toward transit what the city pays. That means the HSR has less money to work with and can't extend service across the city. But instead of fixing area rating, council would rather hold it's nose and keep jacking up fares.

^So instead of demanding fare increases, why don't you demand better service? The truth is suburbanites don't actually want better service, they just want to use their lower service levels as an excuse not to pay their fair share of a vital public service that the entire city benefits from.

Jason: You got that right, these suburan councillors do not understand. What I find amazing is that in the suburan areas of the city, where they have the lowest levels of child poverty, have a say to how bus fares can rise where those that struggle the most, are in the urban areas of the city.

It is a fact that their affordable bus pass scheme is a joke and it excludes many who are on either OW, ODSP and the working poor, as they cannot even afford the $40.00 per month. many who are on social assistance, those who do not work, are excluded period and in many cases, their workers will just tell them to walk across the city if they need bus tickets just to get to mefical appointments and such.

One can see that corporate donation funds some of these councillors who voted for the fare increase, which falls on the backs of those that sturggle.

Gee, if there was no corporate donations, maybe some of these people would not be running, as the people have donated little to their campaigns.

Too bad the province did little to change this, but then what can one expect, when the parties themselves rely on corporate donations and not the donations from the people. Maybe that would explain why the voter turnout rates are so low. The people have lost faith in a systetm, that no longer represents them.

Jason, suburban councillor understand that what the city needs is lower property taxes. Transit users are not bearing enough of the cost of transit.


Hamilton's high proprty taxes are driving business and the middle class out of the city, but we are attracting poor folks because we provide to much in social services. Thus Hamilton has a high "poverty" rate.

Wide roads and low taxes. Sadly, that's all many suburbanites, and too many urbanites, equate with good governance.

But why is it that the more socialist countries with higher taxes are often associated with higher standards of living? Could it be better public services, including transit?

Sorry Ryan but this guy just aggravates me, i will refrain form using words like that in the future.

I may have to pay $3.00 soon, but hell, at least I'll have: a) Several Subway & Streetcar Lines b) Super-Efficient Service (every 5-8 mins) c) 24-Hr Bus Service along many routes & 24-Hr Streetcars d) A Metropass that is not a flimsy peice of paper that falls apart in the wash e) Acceptance that Public Transit is a Necessity & Not For Losers

In Hamilton, you pay $2.55 for: a) Limited Express Service; 1 Line (Weekdays Only, between 6am-7pm); 1 Line that's even worse (every 30mins, during 'rush hours' Only) b) Sketchy Service Times (if they even show up, or don't fly by, full) c) Service ending at 1:20am latest d) A Piece of Paper 'Bus Pass' that falls apart in the wash e) Being Looked at as a 'Loser' for choosing Public Transit over a Car

And of course, fixing rep by pop for the wards is just one more broken system council is afraid to try and fix before their mandate runs out in 2010...

This fare increase is a GREAT move. I guarantee that in the not to distant future, the old city of Hamilton will experience something both unexpected and positive in terms of development and/or employment based.

Jason, you may feel disappointed now, but good things WILL come from this.

A Smith, how do you feel about congestion taxes for urban drivers?

Hey on the bright side, look at all the new tax assessment the City has created in the "Suburbs". Another phase of the Ancaster Industrial Park has sold out...........42 acres of job creation. Way to go! This should help pay for transit and other luxuries such as the Pan Am games. Old Ancaster kicking in again for the benefit of all!

Capitalist: we know what you stand for

From Really? d) A Piece of Paper 'Bus Pass' that falls apart in the wash.

you could make on your computer printer. but then you'd.....

Capitalist, I've answered this before and I'll do it one last time. Our church owns 4 properties, ALL in Hamilton. 2 on the Mountain, 2 downtown. Please observe the map attached at the top of this article if you need clarification as to where Hamilton Mountain and Hamilton's Downtown are located.
And once again, please feel free to add something worthwhile to the discussion or go elsewhere.
Sorry, zookeeper, I won't reply again.

Let me add this to Neary's observation: The Mayor who represents everybody in ALL wards voted in favour of the increase. Therefore, the only one who has no urban/suburban axe to grind supported the increase! What does that tell you?

"Let me add this to Neary's observation"

"What does that tell you?"

That the mayor comes from the suburbs and has a tough job trying to balance the competing interests of the suburbs and the city. He's against fixing area rating because it's too "divisive" so he leaves himself no choice but to support a fare increase.

seancb >> A Smith, how do you feel about congestion taxes for urban drivers?

Suburban >> "The Mayor who represents everybody in ALL wards voted in favour of the increase. Therefore, the only one who has no urban/suburban axe to grind supported the increase!"

Well, if the mayor's opinion is the only one that matters, we could make him an elected dictator and do away with the rest of city council.

But since our system of government gives the mayor's vote equal weight to that of each councillor, suppose we said for the sake of argument that the mayor represented one-sixteenth of the voters in each ward (since there are sixteen members of council.)

In that case, the members of council who voted against the increase represent 271,670 people, whereas those who voted for it represent 217,787 people. Still not very close.

Funny, I've always seen amalgamation as a way to funnel money to the old poorly run City. Let's see, my "suburban" taxes (even though I live in the third oldest Ontario municipality) have gone up at least 20% and my level of service has decreased at least 40%. Sounds fair to me, so lets build LRT and a new stadium Downtown. I'll just open my pocket book some more.

By Balance: Since you give no indication of how long you have lived up there in Ancaster, I will ask the following:

Does the level of service that has decreased have anything to do with the growth up there? I mean if you are my age or older, then Ancaster was more rural and did not have the Meadowlands and all that housing up there. It was a smaller community that has now grown.

You blame the old city but how come no blame for your leadership up there?

Yea grassroots, the Meadowlands with its multi million dollar contribution to the tax base is responsible for taxes having gone up in Ancaster and services having gone down....nice logic for someone who slithers along the grass!

Suburban: So, we are gettng all this tax money and what exactly are all the expenses that we incurr against this income? Can we see the actual finanancial statements that prove your theory?

Of course, social costs are no where in your calculations, are they. Too bad the poverty numbers are starting to climb up there, gee, I wonder how many of your fellow citizens are getting benefit from all your low wage, big store, jobs?